Motorola Mobility, Inc. today announced two new hands-free Elite Series companion devices that are coming to Europe with MotoSpeak™2.0 – The Motorola HZ800 Bluetooth Headset, and the Motorola TZ700 Bluetooth In-Car Speakerphone. MotoSpeak2.0 delivers the latest text-to-speech and speech-to-text technology, allowing users to have their text messages read aloud and to dictate responses. The accessories will be demonstrated in the Motorola booth at Mobile World Congress: Hall 8, Booth No. 8A51.

The two new devices enrich all life’s conversations and equipped with MotoSpeak2.0 allowing users to communicate hands-free, responsibly and productively. The HZ800 and TZ700 are the world’s first hands-free devices designed to allow consumers to respond to texts with their voice. Motorola’s Elite Series family of companion products continues to lead the market with the most advanced hands-free devices, delivering premium audio, robust features and industry leading design. MotoSpeak2.0 also announces the callers’ name to inform users who the incoming call or text is coming from. The MotoSpeak 2.0 application will now support the following European languages: UK English, French, Italian, German and Spanish. 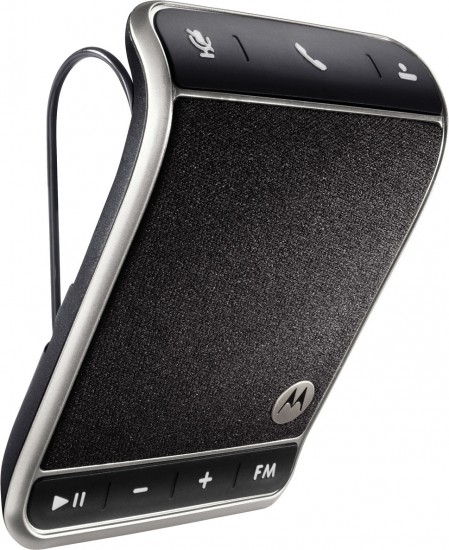 HZ800 is a Bluetooth® headset designed with extreme conditions in mind, equipped with three microphones for optimal noise and wind cancellation. The stealth mode microphone converts vocal vibrations to speech and eliminates noise in up to 40mph winds, so users can rest assured their voice will be heard even in noisy environments.

TZ700 is a Bluetooth in-car speakerphone that enables making the clearest calls from your car. The device blocks out car background noise better than other speakerphones, including those equipped with dual-mic noise cancellation technology. It automatically turns on when the user enters the vehicle and off when he/she leaves, ensuring an excellent hands-free experience, while also saving battery life. Users can even answer and ignore calls with a single word.