Asus today announced the availability of PadFone S, an innovative smartphone and tablet in one featuring leading technology such as 4G LTE-Advanced connectivity, Qi wireless charging, Near Field Communication (NFC) support and a 13-megapixel PixelMaster camera.

PadFone S features a unique two-in-one design comprised of a 5-inch full HD Android 4.4 (KitKat) smartphone that docks into the included PadFone S Station to transform into a 9-inch tablet, giving users the flexibility to choose the optimal screen size for any scenario, such as making phone or video calls, composing email, watching videos or playing games. When docked, apps running on the phone are seamlessly resized to fit the tablet’s larger display. Dual front speakers provide rich and immersive sound, and complement the large display to deliver incredible entertainment experiences. 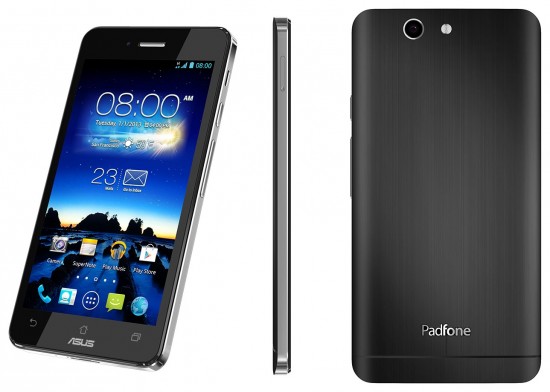 PadFone S has a thin and light design with a stunning In-Plane Switching (IPS) 1920 x 1200 (WUXGA) display covered with durable, scratch-resistant Corning Gorilla Glass with an anti-fingerprint coating, so it is able to stand up to the rigors of daily use. PadFone S meets stringent international operator requirements with its ability to pass numerous drop and water resistance tests. This tough design helps protect PadFone S against falls and dings, accidental spills, and getting caught in the occasional rain shower.

PadFone S features support for LTE-Advanced technology, including Carrier Aggregation, to deliver blazingly fast mobile data speeds for an optimal internet experience and stutter-free streaming music and video. The phone shares its data connection with the tablet, so users can enjoy fast internet access in any usage scenario without the need for a separate data plan.

PadFone S is powered by a Qualcomm Snapdragon 801 quad-core 2.3GHz processor to provide incredible performance so even the latest, most demanding apps and games run smoothly. Its large battery charges the phone when it is docked, providing up to two-times (2X) longer battery life so users can do the things they love for longer. Qi wireless charging support enables PadFone S to be charged without having to plug in a power cable, making charging easy and convenient, while also reducing desktop clutter by eliminating cords and adapters.

PadFone S features a unique two-in-one design comprised of a 5-inch full HD Android 4.4 (KitKat) smartphone that docks into the included PadFone S Station to transform into a 9-inch tablet, giving users the flexibility to choose the optimal screen size for any scenario, such as making phone or video calls, composing email, watching videos or playing games.

PadFone S features a 13-megapixel, f/2.0 aperture PixelMaster camera for capturing stunning photographs that rival or surpass those taken by dedicated digital cameras. It has an external image signal processor (ISP) to provide enhanced noise reduction for smoother, better-looking photos. The camera's Low-light Mode significantly increases camera performance during nighttime and in poorly-lit scenes. By merging adjacent pixels, the camera increases light-sensitivity by up to 400% and contrast up to 200%, resulting in clear and bright low-light shots without the need for a flash.

PadFone S comes with ZenUI, the all-new, mobile user interface exclusive to Asus mobile devices that was developed around the concepts of freedom, expression and connection. Featuring a new visual design made to be efficient and inviting, it contains modern 'flat' icons, vivid color themes, animations, new ringtones and notification sounds, and a clean layout to present information clearly.

Asus ZenUI also includes two features — What's Next and Do It Later — designed to free users from actively having to manage the multitude of information they are confronted with daily, and enable them to be more productive. What's Next puts the information currently most important and useful to the user — such as upcoming appointments, new messages and missed calls from VIP contacts, weather at the next destination, and more — front and center on the lock screen, the home screen and in the notification drawer.

Do It Later frees the user to focus on the task at hand, without forgetting about other important things that they need to do later. If a user is in the middle of writing an email and receives a phone call, a simple button tap automatically creates a reminder to call that person back. Users can also save interesting items, like articles, YouTube videos, or any web page, to read later. Each reminder and saved item is collected in the separate Do It Later app and includes a shortcut to perform the related action, such as call a contact or view a web page.