ASUS today announced the PadFone mini 4.3, a smaller phone-into-pad convertible that merges a 4.3-inch phone into a 7-inch tablet. By making the PadFone much more compact and portable, users can hold both phone and tablet one-handed for the first time. Together they represent a small and practical phone for everyday communications, plus a larger tablet with an HD display - boasting an impressive 1280 x 800 (WXGA) resolution - that makes it perfect for entertainment, games and web.

The stylish phone weighs a mere 105g and tapers to just 8.7mm, allowing the PadFone mini 4.3 to slip conveniently into any pocket. With both SIMs on active standby, it’s perfect for travelers who require either two phone numbers, or a separate data and phone connection. 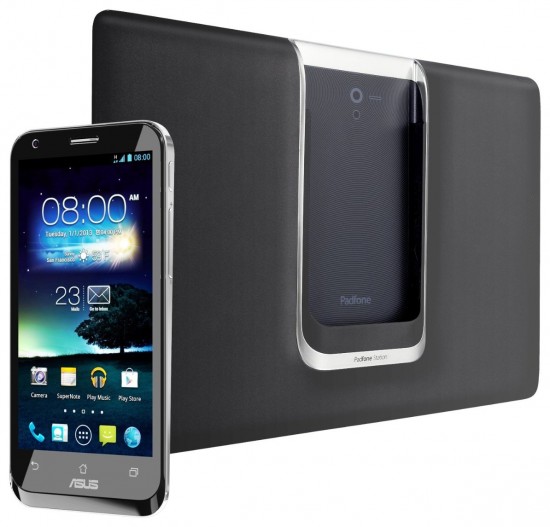 Its 8-megapixel PixelMaster camera has improved low-light sensitivity to provide better night photos without the flash. Meanwhile, a bundle of ASUS apps, widgets and floating windows build on the 2-in-1 engineering experience to bring an unparalleled user experience to the PadFone mini 4.3.

The PadFone mini 4.3 brings together the convenience of a small 4.3-inch phone into a one-handed 7-inch tablet for the first time.

However, the core PadFone features remain the same, with the tablet’s 2,200mAh battery able to boost the 1,500mAh phone battery when docked.

With a powerful Qualcomm Snapdragon 400 quad-core processor, 16GB of internal storage, free ASUS WebStorage and up to 64GB microSD card support, it has all the power and resources users need for both phone and tablet apps.

With dual Micro-SIM support, PadFone mini 4.3 is ideal for travelers or those never want to miss a message. It allows users to keep two numbers or separate data and phone lines, without requiring two phones. Simply pop off the cover and install the SIMs, and the ASUS enhancements to Android allow users to select either SIM on the fly. Users can always see the separate connection status of each SIM directly in the taskbar, too.

The 8-megapixel Sony BSI sensor with a fast, f/2.0 five-element lens is combined with ASUS PixelMaster technology to provide extremely detailed photos, while the Hi-Light option gives four times the light sensitivity for great low-light performance without the flash. Additional ASUS functions include HDR (High Dynamic Range), Panorama, Smart Remove, All Smiles and video recording up to 1080p, in either standard or time-lapse mode.

In addition, ASUS has used its ‘Android+’ philosophy to create enhancements that aid the user experience, with helpful and beautiful user interface modifications that don’t affect the underlying performance. These include an improved taskbar with Quick Settings, Quick Launch apps from the lock screen, SIM naming and control, Miracast support, ASUS Power Saver with custom profiles and the new and intuitive user interface for the camera.