Microsoft Devices Group today announced the Lumia 530, the most affordable Lumia to date, delivering an uncompromised smartphone experience with the latest Microsoft and Lumia innovations. It is expected to be available for an estimated retail price of 85 euros before taxes and subsidies, beginning in August 2014.

Available in both single-SIM 3G and dual-SIM 3G variants, Lumia 530 will expand the reach of Windows Phone as the first Lumia introduced below 100 euros, allowing more people to enjoy the innovations and Microsoft services found in high-end Lumia smartphones, which includes the following: 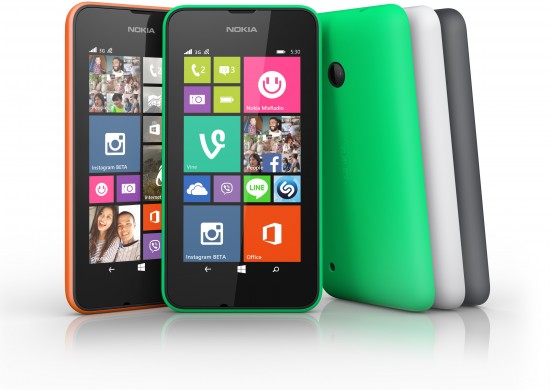 “We are moving quickly to help more people experience the uncompromised Lumia technologies, third-party apps and Microsoft services that we deliver on our flagship products,” said Jo Harlow, corporate vice president of Microsoft Devices Group. “Lumia 530 underscores our commitment to making affordable smartphones for everyone, and introducing more people to the best of Microsoft.”

Available in both single-SIM 3G and dual-SIM 3G variants, Lumia 530 will expand the reach of Windows Phone as the first Lumia introduced below 100 euros

Microsoft also announced the rechargeable Bang by Coloud speaker. Perfect for enjoying music with friends, Bang by Coloud is portable so people can connect multiple speakers together for a loud daisy chain of sound.

The Lumia 530 comes with changeable cover shells in bright orange, bright green, and stylish neutrals dark grey and white. The Lumia 530 will be available globally and begins rolling out in select markets in August 2014.